Are you lucky enough to have some money to invest? If yes then you might have been struggling with compound interest and this would put you in the exalted company of the great seventeenth century mathematician Jacob Bernoulli. Suppose you have $1 and invest it for a year at an (admittedly unrealistic) interest rate of 100%. If the interest is credited once at the end of the year, you will walk away with

If interest is compounded twice a year, at 50% after six months and again at the end of the year, you will walk away with

In a similar vein, if it is credited monthly, you will get

What, so Bernoulli wondered, happens as interest is charged more and more frequently: weekly, daily, hourly, once a minute, and so on? This corresponds to substituting larger and larger values for k into the formula

The numbers that result don’t jump about erratically, neither do they grow beyond all bounds. Instead, as Bernoulli worked out, they approach a specific value:

This can be worked out by simply adding the powers:

Of course your bank doesn’t always talk to you in terms of continuous compounding, so before you can use the handy number e in your calculations you need to convert the rate given to you by your bank into a continuously compounded rate. For example suppose the rate is 6% compounded once a year. We need to find the number r which gives

That number is ln(1+0.06) and again you can easily find it on your calculator. More generally, the number ln(x) is called the natural logarithm of x: it is the power to which you need to raise e to get x as a result.

All this may not seem very natural but the use of the word becomes clear when you realise just how ubiquitous the number e is. Let’s forget money and turn to geometry. The spiral shown in figure 1 is intimately related to the number e: any point on it is at distance ebα from the point 0 marked in the centre of the picture, where a is the angle shown and b is a number that determines the growth of the spiral. Such logarithmic spirals can be found all over nature: in the arms of spiral galaxies, in nautilus shells, or in the shape of many plants. If you pick just the right value for the number b, then you get the golden spiral: it is intimately related to the number f which adorns another face of your Cube. As you move out on a logarithmic spiral its shape remains the same: this fact so fascinated Jacob Bernoulli that he called these shapes miraculous spirals and planned to have one engraved on his tombstone along with the words (in Latin) “Although changed, I shall arise the same”. Unfortunately though, a wrong type of spiral, an Archimedean one, ended up adorning his grave. 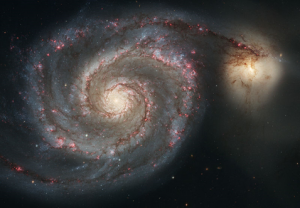 But Bernoulli was not only interested in money and spirals. He also had a taste for probability theory and considered the following problem. Suppose you are a butler putting people’s hats into personalised shelves. You are a bit stressed so you decide to chuck the hats into the shelves randomly taking no note of which shelf belongs to whom. If there are five people and five shelves, and you put exactly one hat into each, then the probability that none of them ends up in the right shelf can be calculated as

What happens as the number n of people gets larger and larger? The probability Pn gets closer and closer to … well you’ve almost guessed it: it’s the number 1/e! This fact was discovered in part by Jacob Bernoulli, as well as Pierre Raymond de Montmort. And if you replace each minus sign in the above expression by a plus sign and add 2 to get

then as you add more and more terms the resulting sum gets closer and closer to e itself.

Bernoulli was a contemporary of that other giant of mathematics, Isaac Newton, famed among many other things for inventing calculus. And in this area too e plays a special role. You can plot the function ex as follows: measure x on the horizontal axis and for each value of x mark ex on the vertical axis. What you see is a graph sloping steeply upwards (see figure 2). As x gets bigger ex increases at ever accelerating speed: that’s exponential growth. Now you might ask yourself ‘what is the slope of the graph at a given point x?’. In other words, what is the slope of the line that just touches the graph at x but does not cross it? You need calculus to work that out and what you will find is that the slope at x is …. ex! A little more calculus will show that e is unique in this sense: all mathematical functions that are also the slope of their own graphs are of the form aex for some number a.

This is why the number e is considered natural: wherever you look it seems to pop up. No wonder Google chose to raise $2,718,281,828 when it launched itself on the stock market in 2004  – that’s e billion dollars rounded  to the nearest dollar. 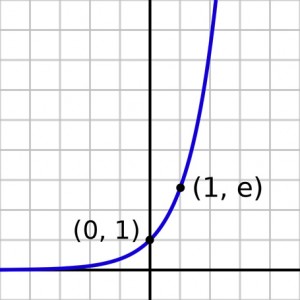